How strangers came together to save the Chestnut Creek Heritage Chapel

Since the early 1800’s, the Chestnut Creek Baptist Church was the center of the Cooper community in rural Chilton County Alabama. But after a new church building was erected in 2007, the old church became neglected and fell into disrepair. There was no indication at that time that the effort to restore the original church would serve to reunite an entire community.

It all began when some people researching their family history happened to meet through an ancestry website. Denise Scarbrough says, “We decided to get together at the cemetery at Chestnut Creek Baptist Church and research graves of common ancestors. About 18 people showed up.” Two of the people Denise met, Pam Persons and Lynn Cerney, would play a major part in the story.

One of the most colorful of the common ancestors buried in that cemetery was Alabama Jane DeVaughn Grant. Most of the people meeting that day had heard the local legend that “Alabama Jane was the daughter of a Cherokee Indian Chief who sold her to some white folks”. However, there is no evidence to substantiate this claim.

“When people saw the photo of Alabama Jane in her wedding gown, they gasped” said Denise. “Everyone had heard about her, but it was the first picture we had ever seen of her.”

After the “Cooper Cousins” met at the cemetery, they decided to have a family reunion at the old church. They were expecting around 50 people to show up, but it was closer to 125 people- from eight states. One cousin from California sent a photo of Alabama Jane DeVaughn and her husband Robert Grant on their wedding day. “When people saw the photo of Alabama Jane in her wedding gown, they gasped” said Denise. “Everyone had heard about her, but it was the first picture we had ever seen of her.” 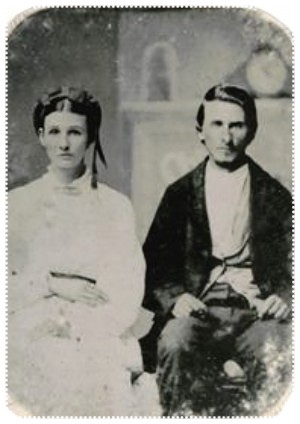 After having 2 family reunions at the Chapel, Pam got word that the Pastor was planning on demolishing the building.  “We met with a church trustee and the Pastor and told him the community would not forgive him if he tore it down.” By the end of the meeting they had reached an agreement: that the building would be sold for a small fee to the group if they would form a separate non-profit, with the goal being to fix it up for the community. Denise, Pam, and Lynn were able to push through the incorporation and along with a representative from Chestnut Creek Baptist Church became the board of directors of the new Chestnut Creek Heritage Chapel.

“We met with a church trustee and the Pastor and told him the community would not forgive him if he tore it down.”

Somehow, they met the local historian Ola Thomas and she joined the board. Nobody seems to remember the events of how they found Ola or when they first made contact.  According to Pam Persons, “It was a God thing.” 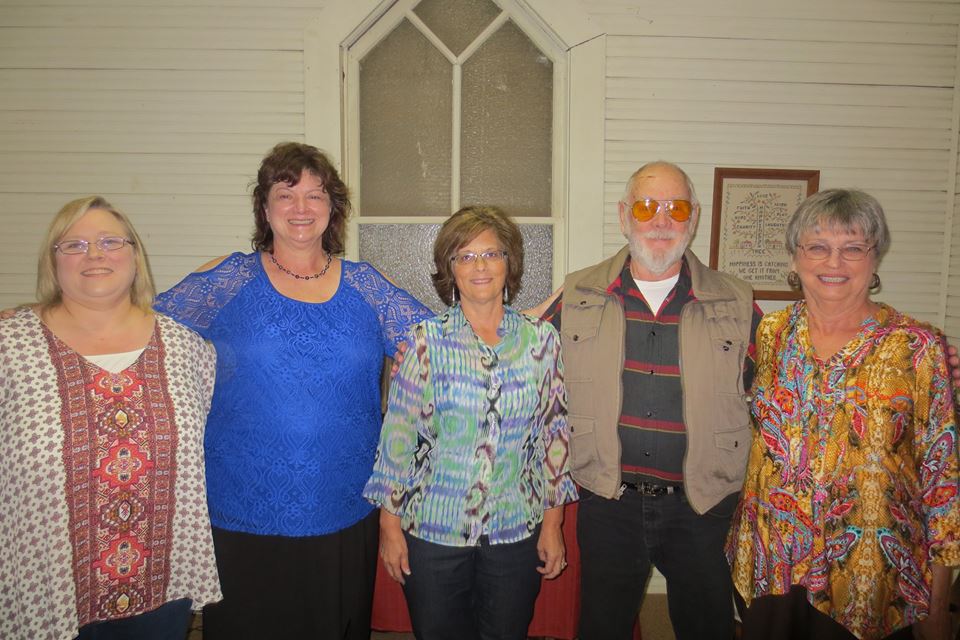 By that time, the building was leaking and the roof had several holes. Local roofer Jim Butters saved the day, temporarily, by putting 18 patches on the roof, free of charge. After that, even without electricity in the building, the group held fund raising events to raise the cash to save the Chapel.

The first fund raiser was the Craft Bazaar, which has become an annual event.  People from the community donated hand-made items, cookies and cider. “It was December and bitter cold” Denise recalls. “There was no electricity or heat in the building but still, we had a great crowd. It was a magical event, bringing a community together to reminisce and raise funds for a beloved cause.”

“We did everything we could think of to fund-raise” said Pam. “When people heard there was water standing in the building, they would stop and donate.” 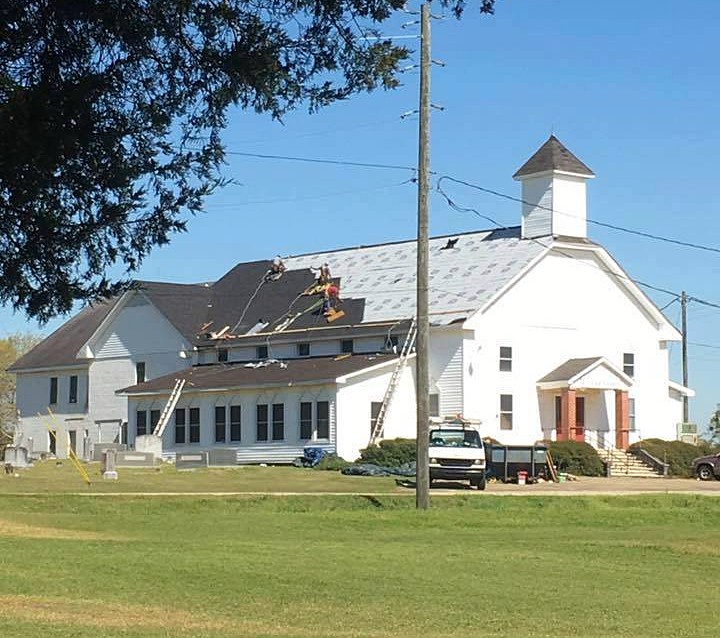 We did everything we could think of to fund-raise” said Pam. “When people heard there was water standing in the building, they would stop and donate. Whatever was needed, the community provided. If we needed roofing nails, we would ask for a donation to buy a box of nails. Whatever we needed, we let people know, and they gave.”

Eventually they applied for a grant through Cawaco RC&D to help cover the cost of a new roof. Then they got a grant from the Alabama Power Charitable Trust for new air conditioners. Other fundraisers included benefit gospel concerts. The concerts are very popular and those who attend donate whatever they can. An anonymous donor recently contributed blinds for all the windows as well as beautiful new hardwood doors.  “And, thanks to a second small grant from Cawaco, we just got the electricity upgraded” said Denise.

“The reason this Chapel is still standing today is that a small group of people cared enough to do whatever it took to save it.”

Deacon Gerald Logan said the effort put into the restoration of the Chapel was an answer to a prayer. “The reason this Chapel is still standing today is that a small group of people cared enough to do whatever it took to save it.” Now, the Heritage Chapel is once again the hub of this small rural community. People who grew up here have a visible reminder of a past that is precious to them.

One of those people, Mrs. Billie Litaker Bates, shared some of her childhood memories:

In 1945,  Billie Litaker was 9 years old when she was baptized in South Prong creek. In those days, new church members were baptized once a year after the summer revival. Back then, there was always something going on at the church. They had a singing school, vacation bible school and dinner on the grounds. Billie said, “The children from the neighborhood would cross through the cemetery on the way to school. Nobody was afraid of the cemetery.”

Like all communities, the Cooper community had its traditions, and one tradition that Billie got to participate in was the ringing of the church bell on New Years Eve. All the teenagers from Cooper would sneak through the cemetery and climb up in the bell tower and ring the bell at midnight. Back in those days, the church was never locked.

“The teenagers decided to hide in the bushes on the outside of the cemetery, one of the boys with his double-barrel shotgun. They waited for Ms. DeLoach and the girls auxiliary.  When the girls got close enough, the gun was fired in the air.”

Then one New Years Eve, Ms. DeLoach and the girls auxiliary decided that they would ring the bell at midnight. Billie Litaker was around 15 at the time. “The teenagers decided to hide in the bushes on the outside of the cemetery, one of the boys with his double-barrel shotgun. They waited for Ms. DeLoach and the girls auxiliary.  When the girls got close enough, the gun was fired in the air.” She said, “it was so dark you could see the fire coming out of the barrels. The young girls scattered.” It took some time for Ms. DeLoach to reassemble them all, and in the time it took her to get them back in line, the teenagers had already entered the church and were hiding on the balcony.

As the girls auxiliary and Ms.DeLoach started towards the church bell, Billie said “the teenagers began to wail and moan like ghosts. All the girls ran away in fear, and the teenagers climbed up the bell tower and rang the bell at midnight.”

Billie told me, “These days, teenagers would get in trouble for doing something like that”. Billie went on to get married at the Chapel, and her wedding picture is kept in a picture book in the Chapel Memorial.

“This building represents the Heritage of this community” says Denise. “The only reason I became involved in this project was because my mother, Melba Cox Hudson, insisted. It has turned into one of the biggest blessings of my life. Everything I do for the Chapel is dedicated to her.” She adds that there are many people who have made donations and dedicated time in remembrance and respect of family.

The little community of Cooper has changed a lot through the years, but the Heritage Chapel stands as a reminder of what life was like for those who lived back then, and as a place where today’s young people can learn about the past. Fundraisers planned for 2018:
September 9- Sean of the South
September 15 – The Barefoot Movement (bluegrass)
Last week in October – Sesquicentennial Event- Chapel open to public to highlight history of the Verbena area.
1st Saturday in December: Annual Craft Bazaar
December 16- Celtic Christmas Concert
The next plans for the building are to open the balcony.
Learn more about the heritage chapel here. Cawaco recently got some press on RootsRated!

RootsRated is a website designed to help outdoor enthusiasts find the best hiking, trail running, climbing, paddling, cycling and more- (including food)- in 30+ cities around the country- all according to local experts. So if you are looking for things to do locally, or while travelling, check out their website! And if you know of places in your area that are not listed, email them and they will add it. We recently suggested the addition of Palisades Park for  rappelling.

To read the article about Cawaco RC&D, click here. The Alabama 4-H center in Columbiana recently closed a $10,000.00 grant they receieved through Cawaco RC&D and the Alabama Cooperative Extension System. The grant provided scholarships to students throughout the Cawaco 5-County area.  The educational objective was to promote environmental education and leadership skills through hands-on experimental learning. Topics studied included entimology, forest ecology, herpetology, macro invertebrate study, orinthology, rivers and reservoirs, and outdoor recreation. The scholarships allowed over 2500 students from Walker, Shelby and Jefferson counties to attend the science school program. Without the funding, none of the participants would have been able to attend these events. Below is a news article from the online version of the Shelby County Reporter pertaining to the stream restoration project at Timberline Golf Course. The print article should appear in the Wednesday July 13th addition. Senior Mentor 80 year old Mike Culotta set a personal goal of training 200 seniors to use the computer. He worked for over 290 hours SO FAR on the project and taught 150 learners on two computers provided by Cawaco RC&D Council Challenge Grant.  The entire project educated 514 learners this year.

WHAT: The Cawaco Resource, Conservation and Development Council will unveil its tool utility trailer for building and maintaining public trails

SIGNIFICANCE: The trailer and tools will provide the equipment needed for volunteers to build or maintain public trails in Blount, Chilton, Jefferson, Shelby and Walker counties providing new recreational opportunities in Alabama at little or no cost to the taxpayers.

The equipment has already been used for debris removal at Ruffner Mountain Nature Center in Birmingham.

The trailer and tools were bought with a $10,000 grant obtained through the Alabama Department of Economic and Community Affairs. Funding was provided from Federal Highway Administration’s Recreational Trails Program.